This year, the Bangkok Metropolitan Administration (BMA) launched its green masterplan, the so-called "Green Bangkok 2030", to increase the number of trees in the city. 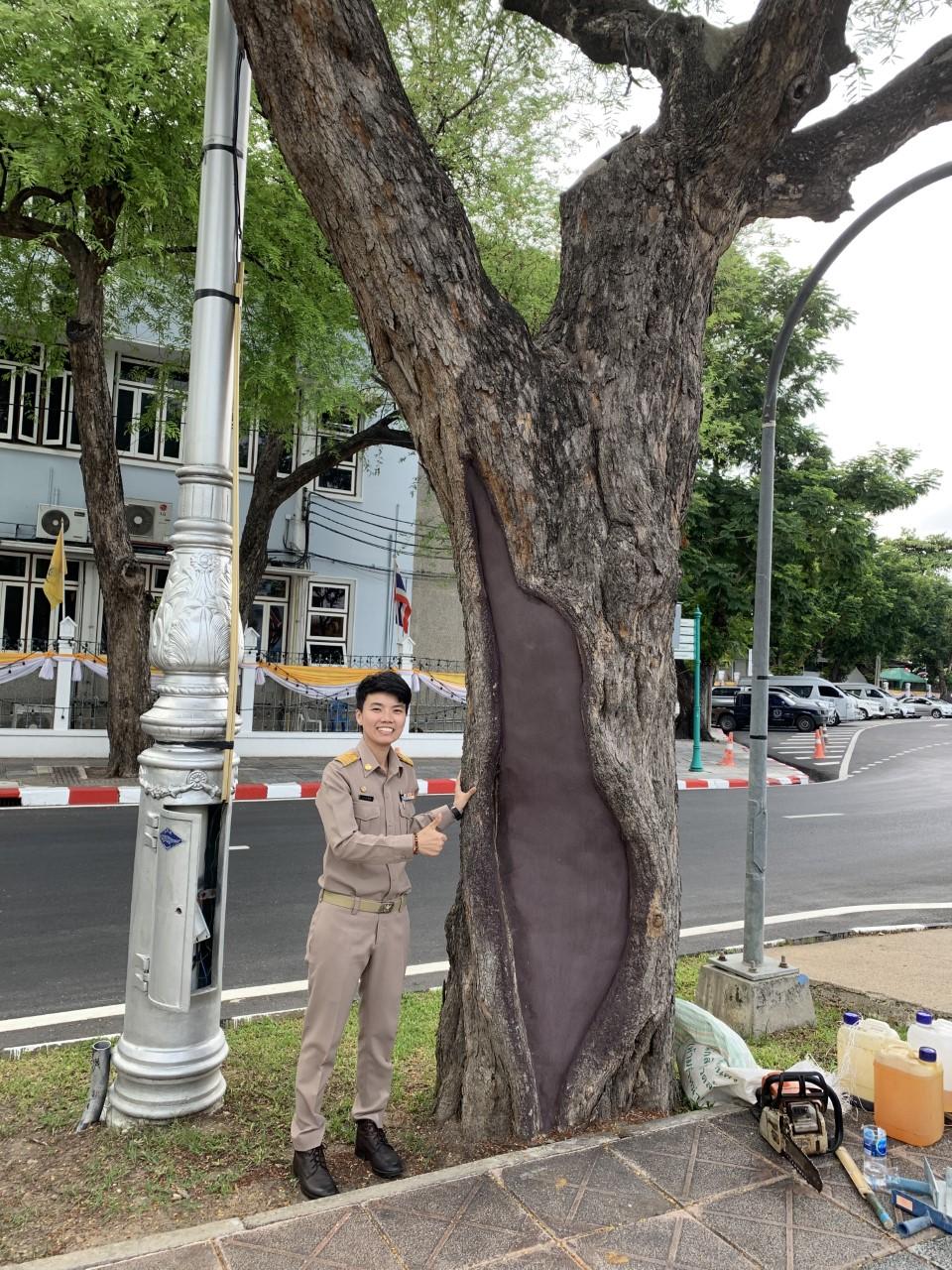 Walailak Puriyakorn, official tree surgeon and professional arborist of the Bangkok Metropolitan Administration, is responsible for taking care of the health of ageing big trees in the capital such as those around Sanam Luang and in palaces. Courtesy of Walailak Puriyakorn

The plan has a target to increase the sustainable green area per head to 10 square metres per person, from the current 6.9 sq/m.

The World Health Organization set a goal for a healthy and green city to have 8 sq/m of trees per capita.

But despite its ambitious plan, the reality on the ground does not seem encouraging.

News of big trees being chopped down appears often on social media. During the rainy season, City Hall staff and in some cases hired gardeners from the Metropolitan Electricity Authority have been deployed to cut trees along streets across the capital city to avoid causing damage to power lines.

Despite these difficulties, Walailuk Puriyakorn, 30, an official at the BMA's Environment Department and a "tree surgeon" of City Hall, said she is hopeful for the future of trees in Bangkok.

"But I am convinced that in the future Bangkok streets will have more leafy big trees. This is possible because everyone, including BMA executives and people in society, share the same vision that big trees and a sustainable green area is the future."

After graduating with bachelor's and master's degrees from Kasetsart University's Faculty of Forestry, Ms Walailak was hired as an official at the Environment Department in 2016.

"My job is not trimming and coiffing tree leaves and branches. I heal them by providing surgery," she said.

Tree surgery is providing treatment to ailing trees affected by disease or a bad environment.

One of the tasks is to inject substances such as polyurethane inside tree trunks to make them stand strong.

Part of her work is to provide surgery to 786 tamarind trees on Sanam Laung. "These trees are old; they have stood there since the reign of King Rama V, so they need constant care," she said.

She revealed that trunks of most of ageing tamarind trees on Sanam Luang have been filled with polyurethane to protect these century-old trees from disease and pollution.

She said many people did not know that she and other officials would paint colours on them to make them look natural.

Next Sunday, Ms Walailak will receive a professional certificate as an arborist provided by the Thai Arboriculture Association. Arborists provide trimming services for these big trees to make them look beautiful.

The certificate will be issued at an event to celebrate the 10th anniversary of BigTrees, an urban tree conservation group which has been working with society, academics and authorities such as the BMA to preserve and take care of big trees in urban areas. That will make her the first professional certified arborist at the BMA.

"New graduates from the forestry faculty have now become interested in working in urban tree management," she said.

"The BMA now has been trying to create manpower and improve the practice of taking care of big trees on streets."

The BMA, despite having the responsibility of caring for three million trees, did not have an in-house professional certified arborist.

That is different from countries such as Singapore which are blessed with well-maintained big trees.

Ms Walailak said there are several factors that the authorities and society need to overcome to develop more big trees in Bangkok.

"The problem of big trees in Bangkok is that they are now placed in an environment that is not conducive to growth," she said.

Many big trees with large root systems are planted on small pavement areas that are not deep enough or have utility lines running underneath.

BIGTree Network : This email address is being protected from spambots. You need JavaScript enabled to view it. / ติดต่อทีมงานทางกล่องข้อความ http://www.facebook.com/BIGTreesProject/inbox

ติดต่อรุกขกร วิสาหกิจเพื่อสังคม
Tree Care Service : This email address is being protected from spambots. You need JavaScript enabled to view it. / โทร 02-004-1642 หรือ 083-024-4053